Mayday had been my ultimate favourite band for years but I haven't had the chance to attend their concert.
After watching almost all of Mayday's concert online last year, I told myself I need to experience that and if they were to come to Singapore I have to watch them. And whoohoo, my wish was answered!

So, I bought tickets to watch the Now&Here World Tour @ Singapore Indoor Stadium
That was my first time watching a concert (JYJ's showcase is not counted because it isn't a full length concert.), and I just couldn't contain my excitement. I've been looking forward to this day ever since I booked the tickets in February. 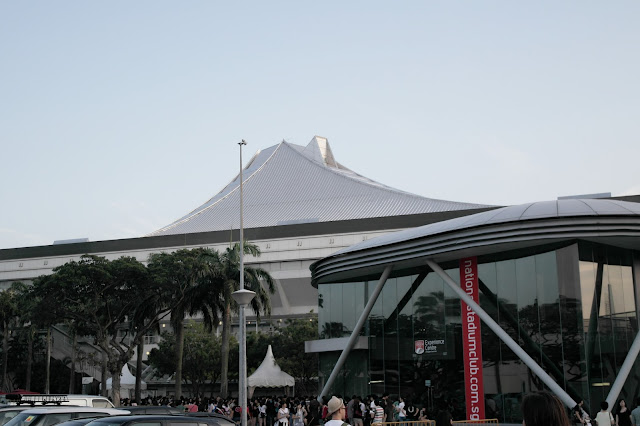 The crowd at Singapore Indoor Stadium 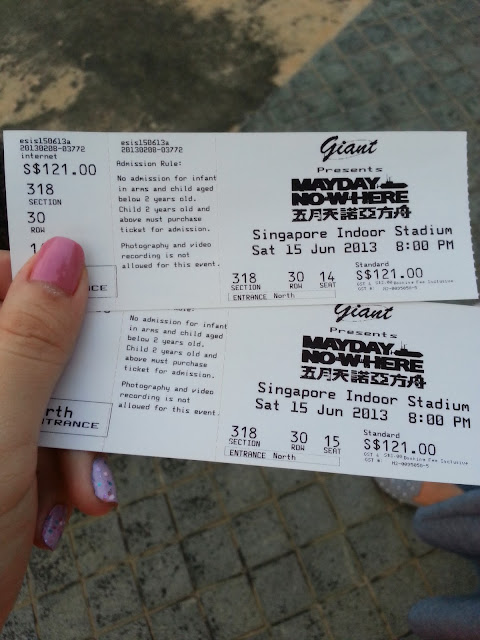 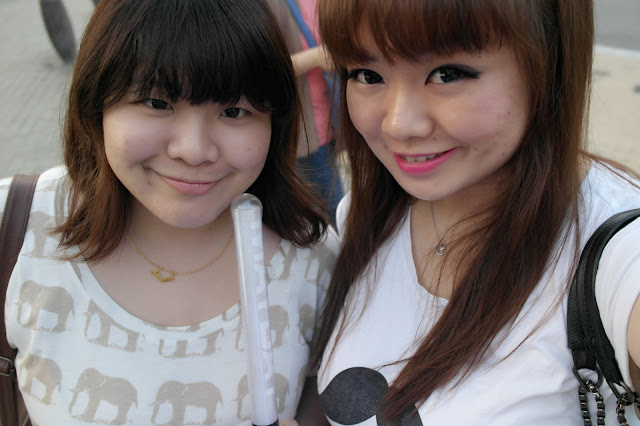 I'm so glad that Sharlene and I share the same interest in the same band! She's the best. 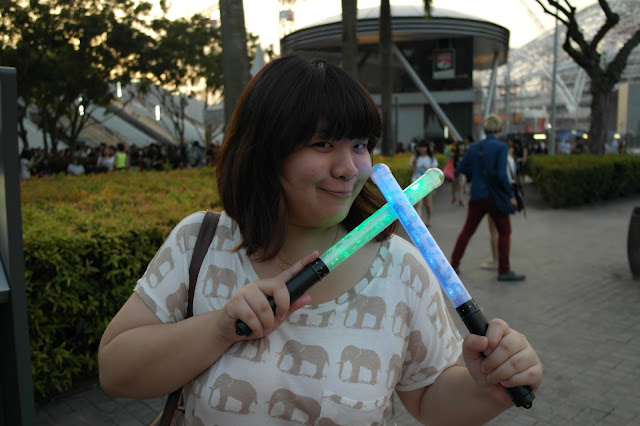 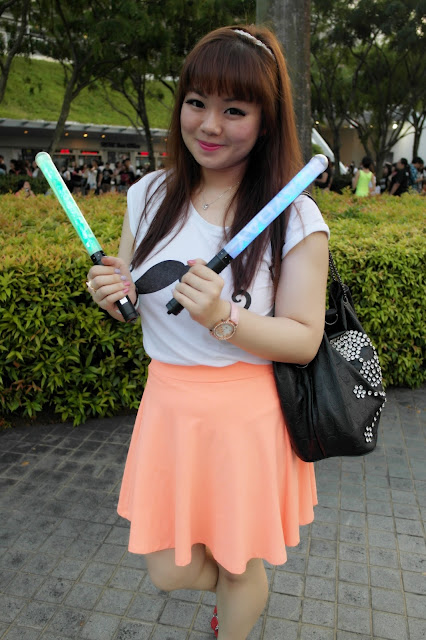 The weather in SG is so cray cray nowadays. T-shirt is the way to go! 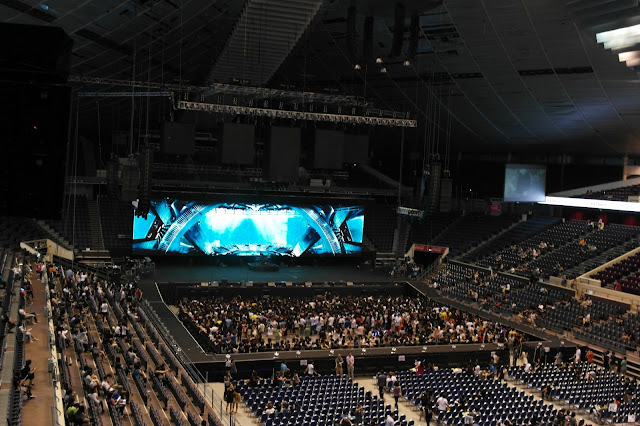 Finally inside the concert hall. We were at the balcony seats which is so far away and the supposedly large screen at both the corners too small for my eyes as well. 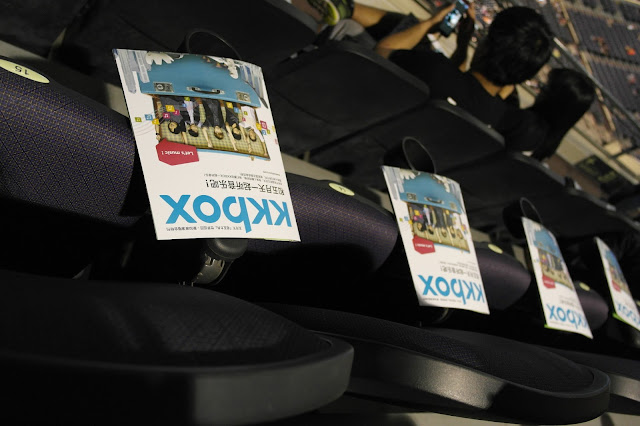 KKBOX leaflets with Mayday on the cover page were distributed on every seat. 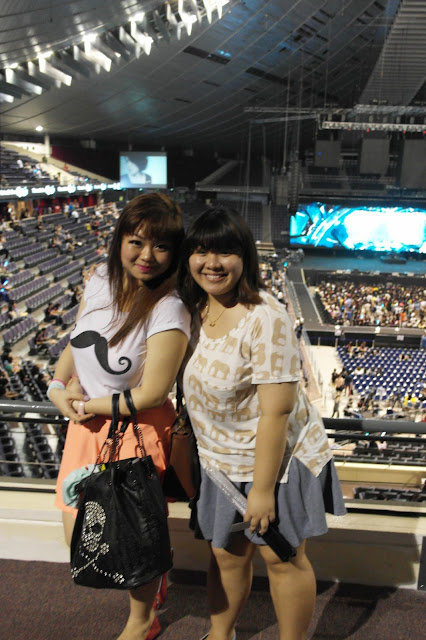 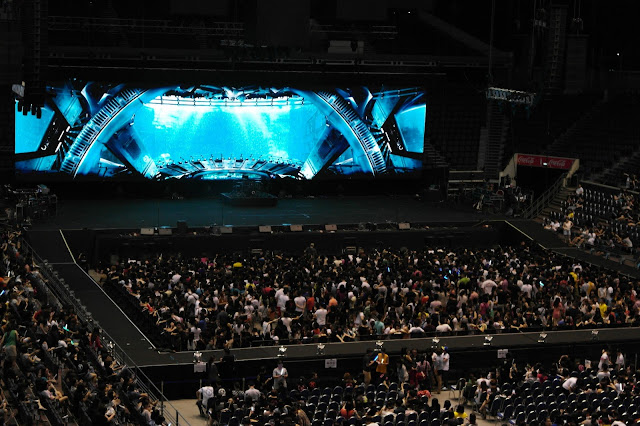 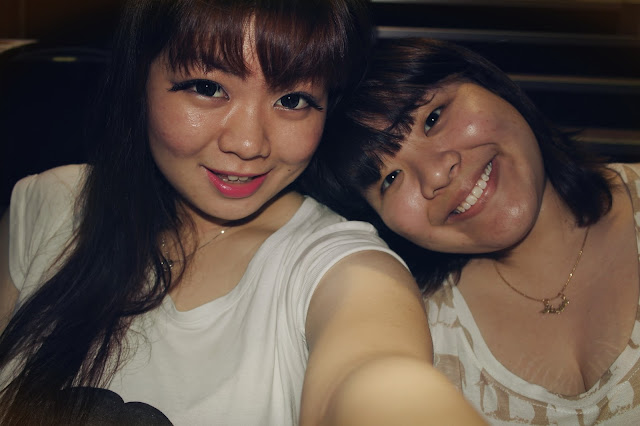 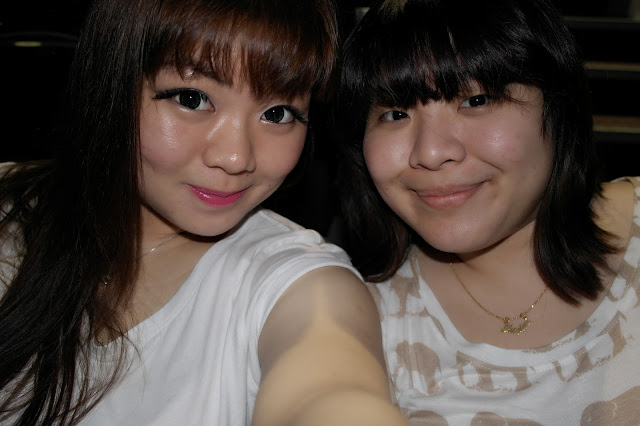 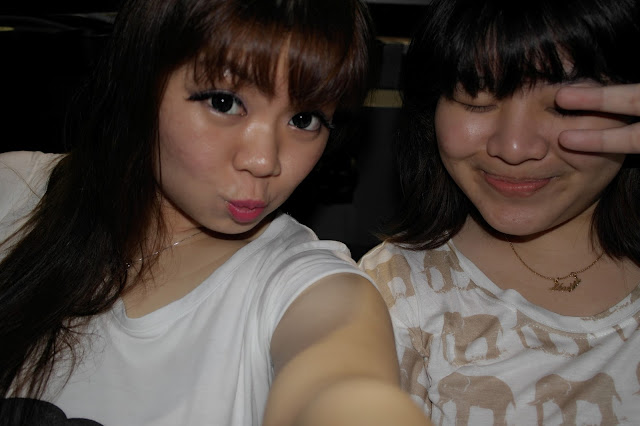 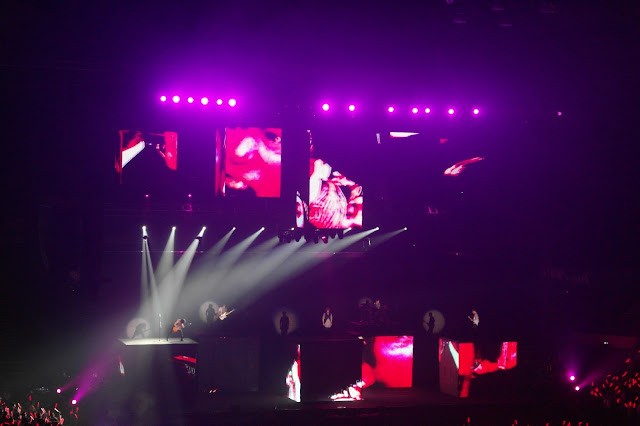 This is my view from my balcony seat. I couldn't even see their faces clearly haha. They are like the size of my fingers from my view. But nevertheless, I sure did have fun. 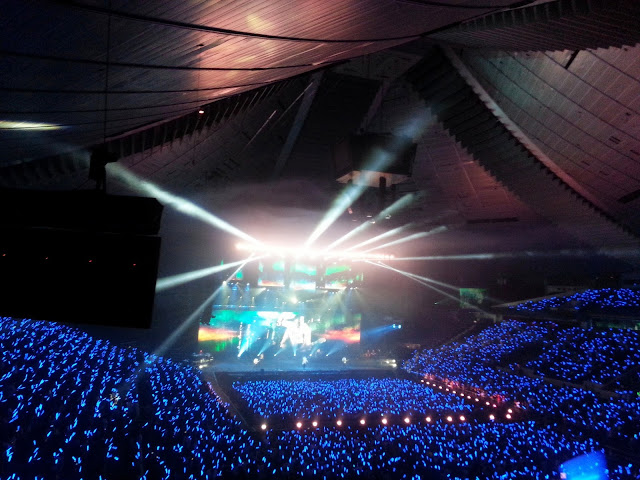 Look at the beautiful blue ocean. Isn't it pretty? What is cool is that our lightsticks were controlled and it would change to different colours during different songs. SO COOL! Shar & I were like "What sorcery is this? This is MAGIC!" Haha.
You can see how the amazing lightstick changes color here. 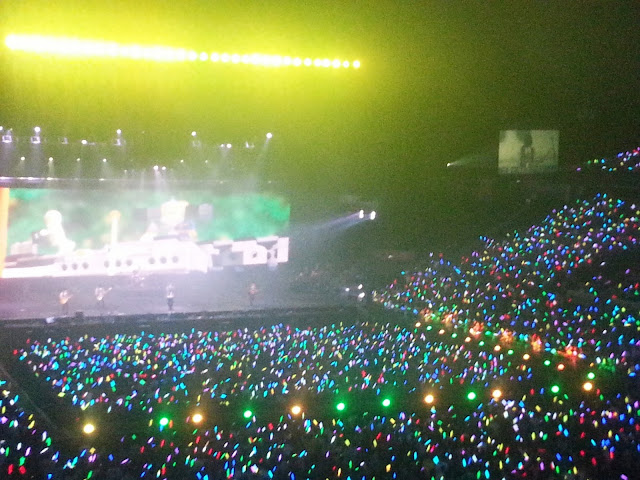 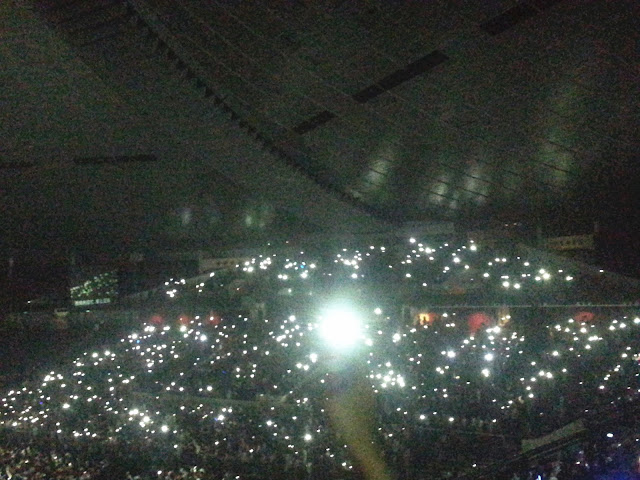 This is the part where 阿信 told us to switch off our light sticks and bring our cellphones out when he sang 知足. 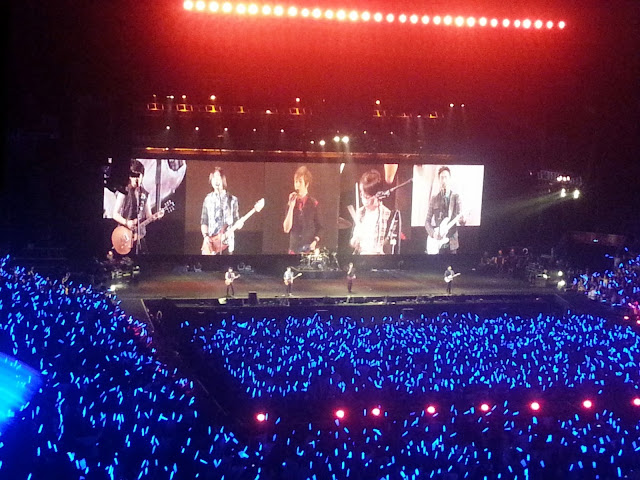 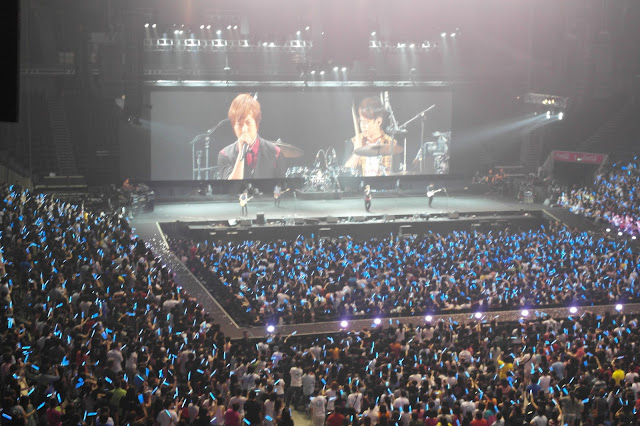 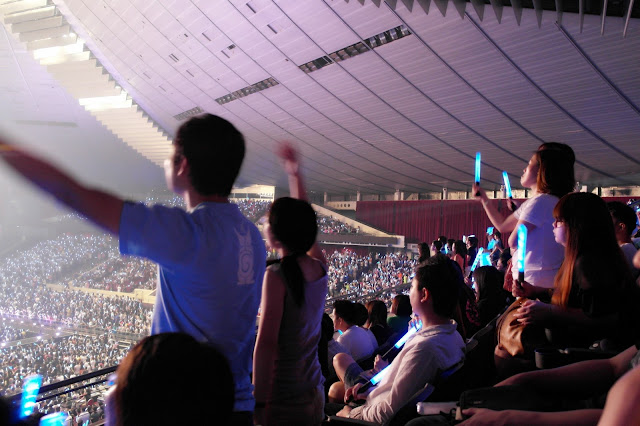 Awesome people on their feet swaying and singing along with Mayday~ I love how people are so high and enthusiastic, standing up to cheer and jump because I thought that's what Mayday's concert is about. But there were some people seated on the chair being so calm over everything, even when they sang 离开地球表面. (That song is made for you to jump and not sit there like a stone yo!) Haha.

I couldn't remember exactly the flow of the concert but I know I enjoyed it a lot when they were performing Hokkien songs from their earlier albums. I don't speak the language but I just love listening to them. It's hard to specifically pick a favourite performance or a favourite song from the concert because I love every song that they did.  For the 3 whole hours, I was waving my lightstick crazily, singing at the top of my lungs along with them and jumping around like a madwoman the entire time.
But I really like it when they sang 温柔（还你自由版), that was one of my favourite songs and one of the classics. When I first saw Mayday performing 温柔（还你自由版) on their concerts I watched online, I was simply blown away by all the emotions and hearing it live is just awesomeness on a whole new level.
Although I'm still quite sad that they didn't perform some songs that I thought they would, but I'm happy that they ended off with their newest single. Even though it's a new song, I could literally hear the whole stadium singing along with them. Go give it a listen, it's so catchy that even before you know it you're humming to the song already.

Indeed, after a concert, one is sure to suffer from withdrawal symptoms. Besides having the usual sore throat from yelling and singing along to the songs, jelly legs from jumping and tired arms from waving the light stick, I keep having Mayday's songs on repeat. Even when I'm asleep, I still listen to them. But nothing beats having to listen to them perform live!
Like someone said, "Watching Mayday perform live is a MUST once in your lifetime." I'm so glad I did it because they were truly amazing! You have to watch Mayday live to believe and witness their awesomeness. If they were to come again, I would sure be there to watch them again.
Thank you Mayday for bringing such amazing performance to the audience!